Placing the post Federal budget analysis aside I am still feeling quite inspired by the discussion of innovation. In this I continue to wonder what is the best foundation to be innovating sustainably?

Firstly any innovation must be sustainable and take into account priorities of a new paradigm. This new paradigm is nicely captured within a recent paper from an esteemed group of academics (Costanza et al 2016) arguing that Australia is lacking in having an overarching commitment to sustainability. In their collective argument they introduce a new paradigm to be considered.

The new paradigm clearly outlines the order of priorities of sustainability and suggests to me not only the priorities but the key to being innovative in the 21st century. The demands of the 21st century are like never before, for example, technology being unprecedented and having a pace of change like nothing any of us have seen before!

Secondly and until most recently the language of a “triple bottom line” as demonstrated in Diagram 2 has been considered as the driver for innovating sustainably. There is a stark difference between Diagram 1 and Diagram 2, with Diagram 2 being somewhat passed it’s used by date model – often termed as the “pigheaded model” (academic author’s description not mine!) 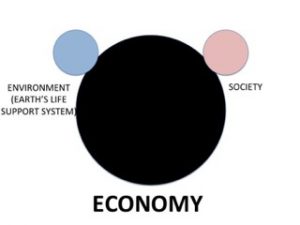 Costanza et al’s collective paper also calls for a Sustainable Development Commission to be established in Australia. Although in agreement with the sentiments of the paper this blog sets the focus on the relationship between the two models (Diagram 1 and Diagram 2) and sustainable innovation.

Any sustainable innovation dialogue particularly in advance of how it could be funded must consider the three domains of the shared economy. Together the relationship of sustainability between environmental, social and economic issues heightens the emphasis on justice and equality. Being equitable to some whilst ignoring others in any given society may bring results in the short-term but is a sure ticket for sustainability issues in the long-term.

The elevation of justice and fairness for environmental, social and economical outcomes as demonstrated by Diagram 1 (the new paradigm) is not an area or debate that Australia appears to be having. Along with the recent Federal Budget the debate appears to be unfortunately caught within the realms of Diagram 2.

This brings me back to my original question – so what is the best foundation to be innovating sustainably?

How can a country like Australia be innovating sustainably when the foundation of how best to be sustainable especially in the 21st century does not appear to be driving the process? This is a global debate and many other privileged countries are working towards innovating sustainably through the Sustainability Development Goals as a form of ensuring innovation is sustainably reached at both a domestic level whilst honouring any international commitments.

As part of my exploration of innovating sustainably I am alarmed to learn that in Australia the very council established for national sustainability in 2012 was terminated in 2013. This adds another question to my former one – who has carriage of the Sustainability Development Goals in Australia that were set and agreed globally 2015?

A quick introduction to the Sustainability Development Goals may be in order as they sit within the United Nations General Assembly and on 25 September 2015 Heads of Government from 193 UN Member States (including Australia) gathered to ratify the Sustainable Development Goals. Collectively they agreed:

We resolve, between now and 2030, to end poverty and hunger everywhere; to combat inequalities within and among countries; to build peaceful, just and inclusive societies; to protect human rights and promote gender equality and the empowerment of women and girls; and to ensure the lasting protection of the planet and its natural resources.

Hon Julie Bishop MP represented Australia at the summit in her role as Minister of Foreign Affairs and was quoted as saying:

Never before have world leaders pledged common action and endeavor across such a broad and universal policy agenda.

In understanding that I have raised lots of questions I seem to be no closer to my original query of what is the best foundation to be innovating sustainably? Finding myself extremely curious on this topic I decided to look further afield to see how other countries are tackling these questions around innovation and sustainability.
In doing this I begin with the Sustainability Development Goals based on the logic that if I am innovating to be sustainable what are the outcomes and measures being used. The country that I found most interesting in their approach is the UK, which has created a platform – UKSSD – towards a sustainable UK. The UKSSD brings together the stakeholders to meet the challenge of the 2030 Agenda in the UK.

Most recently at a senate hearing all sides of the UK government were discussing the intended reporting process against the Sustainability Development Goals. It is great to see the Sustainability Development Goals being energized in this way although it is clear that one of the biggest tensions for the UK is the risk of information being set in silos rather than being shared.

As much as it interests me to explore the international scene I become even more concerned for Australia and continue to ask my question of what is the best foundation for innovating sustainably?

Surely it can’t be any more silos whether it be across jurisdictions or particular sectors. I am keen to link with any groups interested in the topic of innovating sustainably -particularly operating in the new paradigm!

You have Successfully Subscribed!

Dr JMT, Activist and Author helps humans and organisations make better decisions during uncertainty. Drawing on her global experience in social transformation and PhD research exploring the systemic tension between structure (governance) and spontaneity (leadership), Dr JMT has created the Balance Point – a transformative philosophy to help STRADDLE uncertainty and make better decisions the E.A.S.Y Way. Dr JMT has worked in Executive/Board/CEO and freelance roles with a number of NGO’s, corporates’ and government agencies in Australia and internationally.

Any cookies that may not be particularly necessary for the website to function and is used specifically to collect user personal data via analytics, ads, other embedded contents are termed as non-necessary cookies. It is mandatory to procure user consent prior to running these cookies on your website.

SAVE & ACCEPT
Scroll to Top